On Saturday 22nd April, the Three Spires Singers and Orchestra returned to Truro Cathedral to perform a concert combining 19th Century classics with a 21st Century work by Cornwall based composer Russell Pascoe. This is the group’s second appearance since the end of lockdown and, coming as it does just months after the première of Graham Fitkin’s commissioned work ‘Humphry Davy, the Age of Aspiration’, shows their growing commitment both to exciting new work and to supporting local creative artists.

Russell Pascoe’s Secular Requiem was originally scheduled for March 2020, before anyone knew that the world was about to be turned upside down. But, as Lora Wicks (Chair of the Three Spires Singers) writes in her programme note, the devastation of Covid and the current invasion of Ukraine makes its theme of coping with bereavement ‘painfully acute’.

Conductor Christopher Gray launched the evening with two - or rather, one and a bit - works by Brahms: the fourth and fifth movements of A German Requiem followed by his Alto Rhapsody. These were bookended by Mendelssohn’s Overture to St. Paul and Hör Mein Bitten (Hear My Prayer).

After a stirring rendition of the overture, in which the string section admirably showed its prowess at handling tightly knit contrapuntal lines, the choir were joined by young soprano Katherine Gregory for the excerpts from Brahms’s Requiem. At nearly seventy minutes, the full work would have been too long to squeeze into the first half even if performed alone, and the two movements chosen for the concert make good sense in their own right. Ms Gregory gave a wonderful account of the work, her voice ideally suited to the German tongue and mid 19th century musical language, with strong projection and a full vibrato that always maintained razor sharp pitch clarity. The choral voices were complemented by the Truro Cathedral Choir, adding welcome power and tone to the upper lines, if it did rather leave the basses and tenors struggling to compete.

For the Alto Rhapsody, centre stage passed to mezzo-soprano Catherine Wyn-Rogers. A much sought after and seasoned performer, she delivered with fine voice and great carrying power. The heavy orchestration and dark colours of Brahms’s masterpiece ideally benefit from a larger string section, but the lighter weight did ensure that the male choir lines this time came through loud and clear.

Mendelssohn’s Hear My Prayer brought the first half to an uplifting close, Katherine Gregory once again leading the choir with the much-loved ‘O For the wings of a dove’.

The second half of the evening was devoted entirely to Russell Pascoe’s Secular Requiem. This was the third time the Three Spires Singers had tackled the work, and their familiarity with it clearly told through their commitment and security in performance. It is sad to reflect on just how rare it is for contemporary music to receive even a second performance, and how little opportunity there is therefore for it ever to get beyond a superficial note-bashing and sight-reading.

Russell Pascoe describes the piece as a user-friendly work aimed at choral societies to fill a gap in the market. It was certainly that: brimming with strong orchestral textures, scintillating colours and carefully crafted choral writing. Many styles and idioms surface during the eleven poems, perhaps almost too many for a central musical aesthetic to be established. But the pace ensures that performers and listeners alike are kept on their toes throughout.

The first climax of the piece came with Dylan Thomas’s Do Not Go Gentle. Here, the composer showed he had no intention of offering the orchestra an easy ride. The turbulent music, reminiscent of Britten’s storm scene from Peter Grimes, made huge demands on strings and woodwind - demands which they proved themselves more than able to meet. Only the words suffered a little to be heard through the busy textures and difficult acoustic of the cathedral. The three poems that followed allowed lighter, folky elements to surface. Stephen Anderton’s Cats and Cakes even afforded a chance for some humour. In her exuberance at this point, Ms Wyn-Rogers’ voice began to show some hints of strain.

The interjections of Tagore’s Peace, My Heart, which until this point had remained unchanged from one iteration to the next, revealed itself in full at the end of The Transition, heralding in the fifth section of the work and the second of its great highlights: Walt Whitman’s When Lilacs Last. Starting with a slow build over repeating timpani, this movement would have made a crushingly effective conclusion to the work. For this reviewer, the addition of Seasons, while providing a positive note on which to end, felt somewhat out of place, akin to a film that has had pressure from the backers to add a happy ending to an otherwise powerful and thought-provoking movie. Notwithstanding, the performers gave it everything they had, and the work ended to tumultuous applause, composer and librettist joining the conductor, soloists and orchestra to acknowledge their richly deserved reception.

Anyone who has yet to hear the Three Spires Singers and Orchestra should make a note in their diaries of the next concert: Saturday July 2nd, the programme comprising Mozart’s Mass in C Minor, Haydn’s Te Deum and Mozart’s Piano Concerto No 23. One could hardly imagine a programme more in contrast to this one.

Chris Best is a Cornwall based composer and writer. More info can be found at www.chrisbestmusic.com

Click on the links for a selection of  reviews from earlier concerts.

Bach: Mass in B Minor concert

Handel Messiah, December 2106 - we were joined on this occasion by choristers from Truro School Chamber Choir

Philip Buttall: Finzi and others 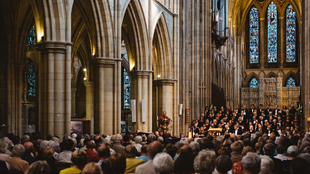